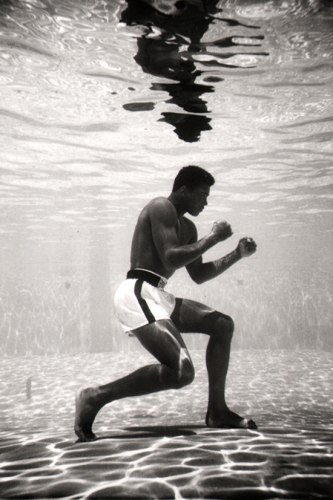 Flip Schulke (1930 - 2008) had the good fortune and good instincts necessary to be a great photojournalist. He also knew how to get a great shot of whatever iconic figure or event he was covering. He seemed to be every place that made important news in mid-century America. The Revolution in Cuba, the March on Washington, The last days of President Kennedy and the Texas Book Depository on that fateful November day, The Space program, and Martin Luther King are just some of the pivotal moments covered by his insightful reportage.

One of his most well known and fortuitous assignments occurred in 1961 when a cocky 19 year old boxer named Cassius Clay was to be photographed for his first time for Sports Illustrated after winning a medal in the Rome Olympics in 1960. The two hit it off right away and Schulke proudly showed the young boxer his recently published first spread in Life on water skiers photographed from underwater. Schulke later met Clay at his hotel where the boxer boasted to Schulke that he trained in a swimming pool boxing underwater to strengthen his jabbing skills. This was a complete fabrication on Clay’s part but is evidence of the boxer’s early and brilliant self-promotional skills as he knew that images of him boxing underwater would be unlike anything that had been seen before.

In Schulke’s own words: “I put on my scuba gear and got several shots of him practicing different punches in the water. Then I turned around, and there he was, standing on the bottom of the pool. I mean, that’s very hard to do, and he’s in a perfect boxing pose So I swam over real quick and I got about six pictures of him. He was holding his breath all this time and not making any movement. The only regret that I have is, when Life ran the story, they didn’t select that picture. More people have requested that picture worldwide than any single picture I ever shot.”

The editor at Sports Illustrated scoffed at the idea of photographing a boxer in a swimming pool. Schulke offered them to Life magazine where they reproduced the images in September 1961 in an article titled “A Wet Way to Train for a Fight” that contained the following quote from Clay “but they say I’m the fastest heavyweight in the ring today. That comes from punching underwater”.

This exhibition features the entire series of nine images made before and after the one shot that has come to represent the perfect instant of Clay in a boxing pose underwater. It is fascinating to compare the varying frames to consider what makes the most well-known of the series an exquisite moment of perfection. ”The abstract reflection of the boxer that appears in the water above his head, the perfect stance and positioning in the water, The light as it filters in the pool, the intense and focused gaze of Clay seemingly unaware that he is being photographed.

Of the hundreds of Images that Schulke made of Clay between 1961 and 1964 nothing compares with these ingenious pictures of the boxer underwater. This was a 'photo opportunity' invented by Clay and his trainer and was it not for their uncanny ability to intuit a great publicity image, these pictures may have never existed.